The successful transition into the nation's premier Division I conference, a trip to the Hockey East semifinals at the FleetCenter, a record seven ECAC titles, one NCAA national crown, 17 All-Americans and a quarterfinal appearance in the NCAA Division I nationals.

Those are some of the more impressive accomplishments of the Merrimack hockey team since it was officially sanctioned as an intercollegiate, varsity program 49 years ago.

The program's seeds, however, were actually planted long before the first recorded season in 1956-57, when Jim Reynolds was the coach and Larry O'Keefe and Joe McColgan were the co-captains of a club that went 4-4-1.

Just a year after the college was founded in 1947, a group of students banded together and formed an informal club they called the "Blue Blades". The Blades rented ice off Merrimack's one-building campus for $30 an hour and played anybody who would agree to a date, time and place.

The program gained some instant credibility in 1953 when then President Father Vincent McQuade appointed Father Paul Thabault, recognized as the father of Merrimack hockey, as a moderator/coach of the team. John Twomey '56, an instrumental figure in organizing the program that year, would later serve as captain under Thabault for two seasons. Father Thabault and his skaters constructed Merrimack's first home rink - an outdoor model - and made ice with the help of a fire hose on the North Andover campus in 1954.

Under Father Thabault's guidance, the Warriors started intercollegiate play in 1954-55, as the college offered more support to the program in the form of a modest budget, new uniforms and varsity letters. Babson, Worcester Polytechnic Institute and Keene Teachers were among the first intercollegiate competition Merrimack hockey faced that year. And for the first time, the college recognized hockey as a varsity sport.

The schedule was upgraded to include Providence and Holy Cross, as well as Babson and Worcester Polytechnic in the ensuing season. The program took another leap forward in 1956 when Jim Reynolds was hired as its official coach. At that time, statistics and records were duly recorded.

Since its inception, Merrimack hockey has been a success story. Beginning with the formulative years under Thabault, and continuing with successful play under Reynolds, the late, legendary mentor and athletic director J. Thom Lawler (for whom the Lawler Arena is named), Bruce Parker, Ron Anderson, Chris Serino, and present day leader Mark Dennehy, the Warrior hockey program continues to thrive in its fifth decade of existence and success.

The Warriors were crowned NCAA Division II national champs under Lawler in 1978 and ECAC Division II champions in 1967, 1968, 1977, 1980, 1987, 1988 and 1989. The 1989 team matched Lowell's record by winning a third-straight ECAC East crown. The Warriors made their only NCAA Division I Tournament appearance as the Independent at-large entry in 1988 and stunned Beanpot and Hockey East champion Northeastern in the first round of those playoffs before bowing to eventual national champion Lake Superior State in a tightly-contested quarterfinal series. Senior captain Jim Vesey was honored with the Division II-III East Hobey Baker Award.

Led by Coach Ron Anderson, a new era began for Merrimack hockey in 1989 when the Warriors competed in their first season as a member of the Hockey East Association. That team posted an overall record of 10-24-1, but pulled off the surprise of the season by taking eventual league champion Boston College to a third and decisive playoff game. And after being picked for the bottom part of the league in three of the last four seasons, the Warriors continued to baffle the experts by battling for home-ice advantage all season long while defeating several Top 20 teams. And with the roots of the Merrimack hockey tree that were planted in Hockey East seven years earlier firmly entrenched, the 1996-97 Warriors entered a new chapter in history by qualifying for a Hockey East playoff home ice berth. The 1997-98 team raised the bar a little higher by upsetting top-ranked Boston University in the quarterfinals and earning a trip to the conference semifinals at Boston's FleetCenter.

The 1998-99 season began yet another era in Merrimack hockey history with the dawning of the Serino age. On April 24, 1998, Chris Serino became just the sixth head coach in the program's history. The Warriors posted a mark of 11-24-1 in Serino's inaugural campaign, and senior forward and captain Rejean Stringer was named an All-American, Merrimack's first ever in the University Division. In Serino's second season, the Warriors set an NCAA record for consecutive overtime contests by playing in six straight at the end of January, and in 2000-01, the Warriors notched 14 victories, the most for Merrimack since 1996-97. Several of those victories were over nationally ranked opponents.

In 2002-03, senior goaltender and captain Joe Exter led Merrimack to a surprising race for home ice throughout much of the season, including the team's first-ever regular season Division I tournament title with wins over host Rensselaer and Wayne State at the 52nd Annual Rensselaer/HSBC Holiday Hockey Tournament in late December. Exter was selected to the All-Hockey East Team by league coaches. Long-time assistant coach Stu Irving was also honored, as the American Hockey Coaches Association presented him with its Terry Flanagan Memorial Award in recognition of an assistant coach's career body of work. The season also saw the inauguration of the Blue Line Club, the program's official support organization.

Taking the reins of the Warriors in their 50th season is Mark Dennehy, who was named as the seventh coach in school history on June 30, 2005.

Phase III will involve the addition of a two-story lobby and concourse that allows fans to enter the arena directly from the parking lot, and a visiting locker room will also be added. The renovations will be completed with the pouring of a concrete foundation and installation of 3,000 individual seats along with a new 3,000 square foot VIP lounge, press-media boxes, concessions and four additional luxury boxes. When finished at an estimated total cost of over $17 million, Merrimack's Volpe Center and Lawler Arena will provide a premier athletic facility for the Merrimack community. 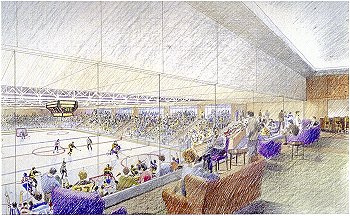